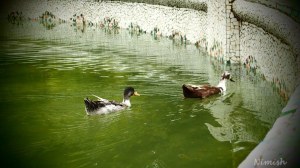 This is a piece i had written back in 2008 but back then i didn’t have a proper image to go with it. I went to the same spot after a good four years and found the two protagonists in my writeup doing their thing. So here goes…
January 2008
I have been a fan of the French movie Amelie (La Fabuleux destine d’Amelie Poulain), and never miss out on any opportunity to spread the word about the movie, to a connoisseur of World Cinema. By Amelie Moment, I mean moments wherein a smile erupts on our faces, without any material stimuli. A smile triggered via a happiness that’s born within us. Only condition is that one should keep one’s mind open, and absorb oneself in the moment completely. I have named it after Amelie’s attitude towards life and her knack of extracting immense pleasures through some really simple things in life, a rarity in the present age.
Bored with the regular monotony of office work today, I headed to a garden nearby with a couple of colleagues, in a sincere hope that it would keep my mind off work for some time. While they were still discussing work, I just completely shut off my mind and prayed that the work blabber end. If only.
I noticed a fountain nearby, which was filled with ankle-deep water. There was an abstract installation bang in the middle of the circular fountain. It was black in color and placed on an assembly of huge boulders fixed to the base of the circular area of the fountain. It surely wasn’t a sprinkler as there were no pipes visible and the structure just jutted out in all directions. Just when I was observing this abstract art, and trying to make sense of it, from out of nowhere, paddling through the ankle deep water came two ducks.
Under normal circumstances, I wouldn’t have cared to look a second time, but today, I actually kept my mind just on those two ducks. I had heard of the phrase ‘living in the now’. Tried to give it a shot. 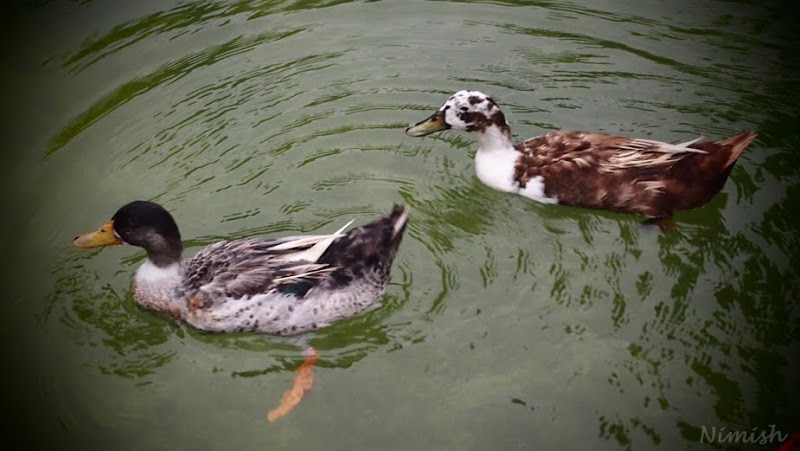 Observation was completely onto those two angelic ducks. They seemed lovely together, in a place that was completely out of context for these birds. Generally seen in a raft of over a dozen ducks, seeing just a couple made me all the more attracted towards them.
The dark green headed duck, lets call him Donald, was enjoying the afternoon sun with his white headed mate, lets call her Daisy. Donald and Daisy seemed oblivious of the surrounding world, happily paddling their way around the circle. The orange feet with the webbed digits looked completely out of place considering the overall white body color. The pattern formed by the separated water once Donald and Daisy sailed through it was very photogenic indeed, reflecting the black art structure along with trees on the trough and the sky on the crest of the ripple, forming a diverging V-Shape.
Donald didn’t seem content with just paddling, his beak was scanning the water surface for some microscopic catch, a tadpole maybe. Daisy seemed like she didn’t give a damn about food. Maybe she was on a strict diet, who knows. Wasn’t really understanding if Donald was cleaning his beak or hunting. Water seemed pretty clear though, hardly any tadpoles were visible.
‘Think like Donald dude, had he the intelligence to deduce that, he’d be in your place,’ said my mind. Donald seemed to keep trying. That was the beauty of the moment. The oblivion of Donald to the fact that there was no food for him in the form of fishes, yet him trying with all his might. I was just wondering, ‘How boring would it be if Donald actually knew there wasn’t any food?’
A smile slowly started to form on my face. Thoroughly amused by Donald’s antics and Daisy’s almost royal stance while paddling, I felt really refreshed. Couldn’t believe that so simple a moment would actually pull me out of my blues.

So, while Donald and Daisy continued their thing, I called out to my colleagues, and after a glass of chilled pineapple juice, we all headed to our office, with me, going with a much more clearer and refreshed mind.
Take Care,
Ciao!

Three things, in ascending order of stupidity, were going through my mind when i was composing this shot :
Scenario 1 : This guy is probably waiting for his girlfriend, to spend some quality time with her in the Horniman circle garden behind him. He’s had a long work week. In fact, he’s just come straight from his office to this spot. For a change, he has arrived earlier than his girl.
Scenario 2 : This guy had probably come to drop a letter in the box. But in the hurry (probably due to lack of sleep, as explained in scenario 1) ended up dropping the envelope filled with his salary cash. Now starts the wait till NEXT CLEARANCE which according to the letter box is at 8.50 am. 20 minutes to go till then.
Ok, now do not judge my mental well-being on this one.
Scenario 3 : This guy has probably had a fight with Box No 54. He was confused as to which side to put the letter in through. He asked the letter box himself and on not receiving any answer started kicking and abusing him. Box No 54 is probably thinking to himself, “The impatient fool, can’t he see i am forbidden from speaking till 8.50am?” and he goes back to sleep, leaving the stranger looking out for help.
I can’t remember the last time i used a letter box. Probably a decade back. Wonder how many people in the city (barring for official purposes) use the letterbox for personal mails. Hell, even office work happens through courier services these days.
But, it feels good to have these around. Reminds you of simpler times.
Take Care
Ciao

This is going to be a non photographic post.

Kala Ghoda Arts Festival (KGAF) is one event i eagerly await each year. Its a time when the whole Art District gets a complete artistic makeover. Huge art installations dot the parking lot and the Rampart Row; stalls of Indian ethnic and regional accessories; crowds on the steps opposite the amphitheatre; literature lectures at David Sassoon Library; plays at Horniman Circle; film screenings at Cama Hall and workshops among other things, are like steroids for a culture vulture.

I remember the first time i had visited KGAF was when i was in engineering. I wasnt that into art and culture then, as the only thing that excited me was technology (not that technology dosent excite me now) About two years back i actually started to engage myself in this festival by participating in workshops, being a part of the audience at David Sassoon Library, watching World cinema at Cama Hall. My love for art and culture has grown by leaps and bounds thanks in part to KGAF.

It’s been two hectic days of KGAF, with 7 more days to go. Have attended lots of events so far and have lots to say. Lots of photographs to share as well. So this is like my personal curtain raiser of sorts for the KGAF on my blog.