Where do I even begin with Pico Iyer?

I always used to read travel writing literature as a destination-specific story, informing me about a place or the adventures had along or during the journey. While that still holds fort for me, off late it’s the ‘Why we travel?’ question that I seek answers to. Iyer’s work always gives nuanced responses to that question and one of the reasons why my locker and Kindle always have his books up front.

His work stands out amidst the travel writers I have read (and I have read a lot of them) in the sense that his writings are as much about the inner journeys one undertakes during the external wanderings. He has touched upon it brilliantly in his TED Talk on the Art of Stillness.

Sun after Dark: Flights into the Foreign is yet another fine example of that oeuvre. He weaves it into beautiful prose and gives a resonance to the thoughts you may have had on some trip to some place, planned or otherwise.

Unlike his other books such as Video Night in Kathmandu or Falling Off the Map or even The Lady and the Monk: Four Seasons in Kyoto, where Iyer goes all in on the nuances of the places explored through the places and its people, in Sun After Dark, the place happens to be incidental whereas it’s the layered perspective he brings out that make the story. After a point, you forget that it is a travel book. In that sense, it is on the same wavelength as that philosophical treatise on travel by Alain de Botton, The Art of Travel.

Sun After Dark is a collection of travel stories, philosophical essays and slice-of-life profiles of people encountered during the travels. And keeping in the vein of Falling off the map, Iyer ventures to some remote places on the planet. Easter Island, on a new year’s eve, anyone?

What’s more interesting though is the places or subjects he revisits: Japan (he has been living there), India, Tibet, personalities such as the Dalai Lama, Leonard Cohen. This revisiting gives interesting insights into a place and the personalities. The chapter on Leonard Cohen, the Canadian singer-song writer turned Buddhist monk’s right hand man, wonderfully explores the reasons behind the transformation of the person. The Dalai Lama, on whom Iyer has written a separate book altogether (The Open Road), straddles the world of monastic duties, keeping the exiled Tibetan flock together, addressing huge crowds, being in celebrities’ list of friends and more. Who’s the person behind the personality? The chapter “Making kindness stand to reason” explores just that.

In the essay “Nightwalking”, one of my favourite in the book, Iyer explores that state of limbo that is somewhere between a jet-lag and re-adjusting to your home or foreign settings after a long-haul flight. The virtues of being on the same time setting of your home country to the absolute failure of trying to fight jet lag as you age, Iyer wonderfully explains that feeling of being in that weird frame of mind that follows a return from a long journey. I have experienced that always after a trip to and from the US, where no matter what strategies I try, I end up ruining my sleep cycle for a few days at least.

“A Far off Affair” showcases India in an interesting light, through the typos in the sentences on notice boards or language in daily parlance, and not just stopping there but trying to dig in to the etymological histories.

“Happy hour in the heart of Darkness” set in Cambodia, debates on the ethics of travel to places where you could be enriching an extremist government. This is something even a Jack Dorsey could relate to, after the furore caused online after he posted his post-Vipassana photographs from Myanmar.

Each essay is full of insights which needs to be read, reread and pondered over. It peels another layer of that question which has started to pique my interest – why I travel?

I would like to end with one (of the many many lines) that stuck with me after I was done with the book. Says Iyer,

The physical aspect of travel is, for me, the least interesting; what really draws me is the prospect of stepping out of the daylight of everything I know, into the shadows of what I don’t know, and may never know.

We have all come across these shadows, at some point in our travels.

Iyer does the hard work of putting them into words. 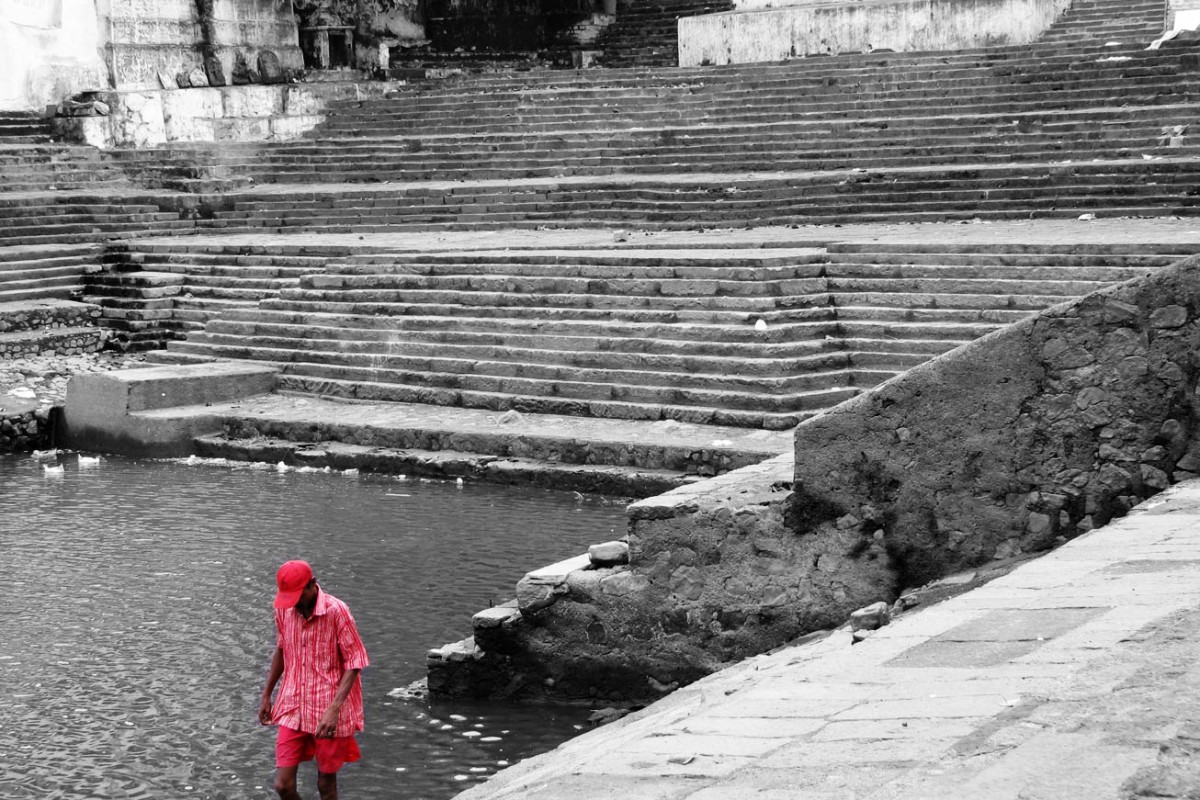 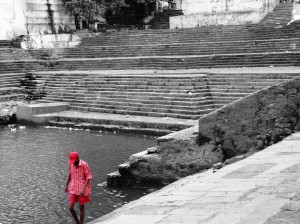 Was hanging out around the Banganga premises in Girgaum area. Its a peaceful area, with the silence punctuated by the quack of the ducks and bells from the temples. The showstopper here is the network of stone steps which ultimately lead into the water body. The water body, according to Hindu Mythology came into existence after Lord Ram struck an arrow into the earth resulting in sprouting of water. The name Banganga separates into Ban = Arrow and Ganga – the name of India’s holiest river.

Here time seems to stop for reasons unknown. Surrounding the Banganga premise is a large number of temples dedicated to the numerous Hindu and Jain gods and godessess. A very religious feel this whole place has.

The guy in the photograph was the only human being i saw other than me in the entire complex. He was just walking from one end to the other, seemed to me that he was introspecting.