When one talks about the architecture of Barcelona, one term that you will constantly keep hearing is Modernisme. This was the art form that had its golden period from the late 1800s to early 1910 in Barcelona and was expressed chiefly in the form architecture along with painting, design, decorative arts and more. This was a move away from the prevalent Gothic styles of architecture and it also played a major role in giving Barcelona, and in effect Catalonia, a unique cultural identity.

The whole idea behind switching to Modernisme style was to reinforce the political and economical stability of the region of Catalonia, while the rest of Spain was going through bad times. This was a period when patrons gave preferences to Catalan architects over others. Just like its Football team, the Modernisme movement is also a symbol of the Catalan identity. It is fascinating how so many aspects of Barcelona have had an ulterior objective at some level – that of Catalan independence.

In Barcelona, apart from the Gothic buildings that you see in the Ciutat Vella or Old Town, you will find a lot of Modernist buildings outside the old town. The district of Eixample was the playground for a lot of modernism architects. And the gravity of this movement becomes evident when you learn that there are 9 buildings in Barcelona which have the UNESCO World Heritage tag – and all of them belong to the Modernisme school of thought.

Along the Passeig de Gracia (in the Eixample district), in one of the most expensive streets in Barcelona (and whole of Spain), one gets to see brilliant examples of this style of architecture. 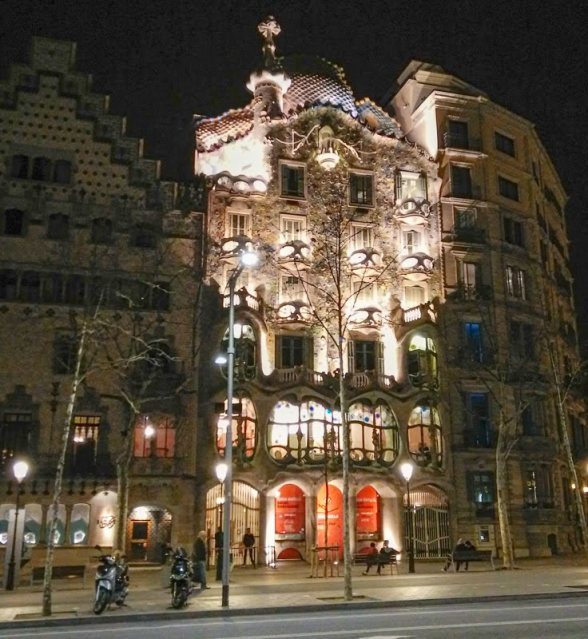 There is one section in particular that had me impressed right from the moment I first set my eyes on these buildings, accidentally. So one evening while travelling back to my hotel I had to change my metro lines. At the Passeig de Gracia station, I couldn’t buy a ticket because the vending machine didn’t have a change for 20 Euros. So I had to head out of the Passeig de Gracia metro station to get some change. On exiting the metro station, I just happened to look on my right and there it was in all its lit up glory – the Gaudi masterpiece – Casa Battlo! I knew I was coming back to this very street in the coming days.

The reason this street is special, is because you get to see three buildings side-by-side, touching each other literally, built by three Modernisme geniuses who were almost contemporaries. And although all three buildings belong to the Modernisme school, they are as different from each other as the CST building is from the Gateway of India in Mumbai. This is the main reason this street block is popularly called the ‘Illa de la discordia’ or the ‘Block of Discord’. Interestingly, none of these three buildings were built from the ground up in the Modernisme style, but were renovated towards the late 1800s thanks to the patronage by the rich families living in Barcelona at the time about whom I will elaborate below.

So let us look at each of these masterpieces, which I had only enough time and budget to admire from the outside. Maybe the next time I visit this beautiful city, I’ll keep aside time and money to check them out from the inside as well. 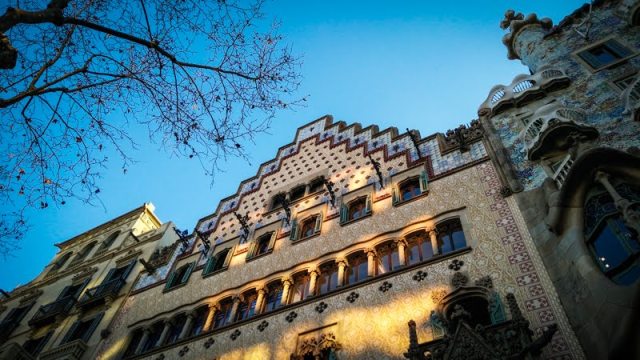 This building was commissioned by the chocolatier Antoni Amatller, and the building still has the Amatller’s chocolate outlet. I learned that after getting free dark chocolate tasters at the entrance of this building whose ground floor is free for exploration. The front facade of Casa Amatller is clearly inspired by the houses one sees along the the Netherlands or in the squares of Belgium – you know those triangular roof with a tetris-style sloping design (can’t think of another way of putting it). I also saw a lot of gargoyles and minor detailing on some strategic points, clear pointers to the use of some neo-gothic styling. I couldn’t understand the symbology behind the figures though. One unique thing I noticed along the facade was the almost wallpaper-like look. I need to research on this style of decorating the walls, which I saw quite a lot in Barcelona. Will update accordingly. 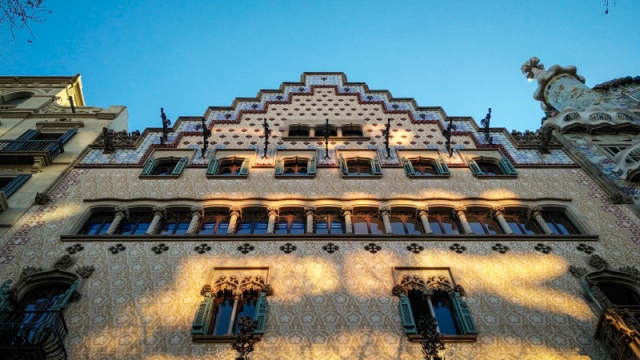 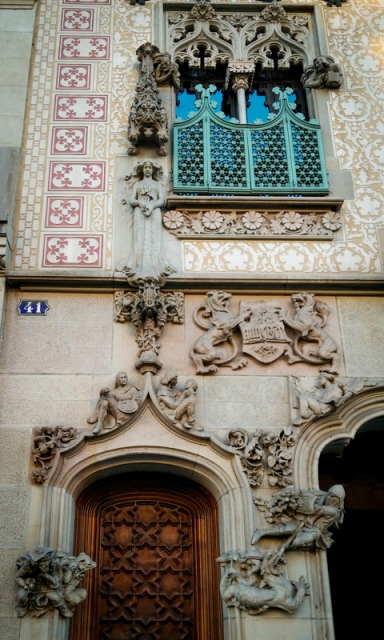 Casa Battlo by Antoni Gaudi
No two ways about it – Antoni Gaudi was a genius. His architectural style was nothing like his contemporaries. Even something as entry level for an architect as a lamp post – which was his first assignment that graces the Placa Reial – had the trademark Gaudi stamp of using elements from nature. 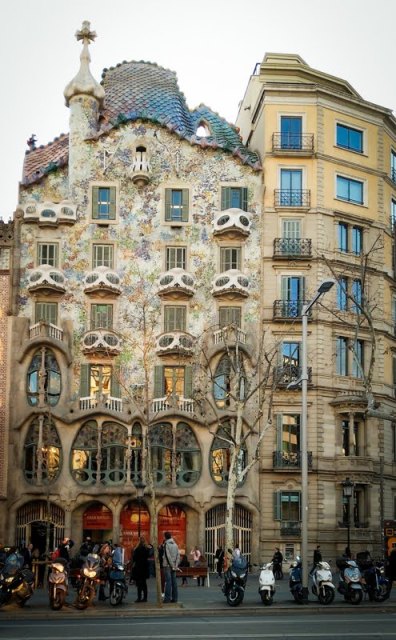 Casa Battlo, just like the Sagrada Familia and Casa Mila, has a very organic sort of design. It wasn’t built from scratch but was a renovation of an existing building which Gaudi himself had built. Josep Battlo, a prosperous textile merchant bought the house in 1900 and wanted a design that would make his house stand out from the others on Passeig de Gracia. Instead of building it from scratch, Gaudi suggested plans to renovate it in 1904. 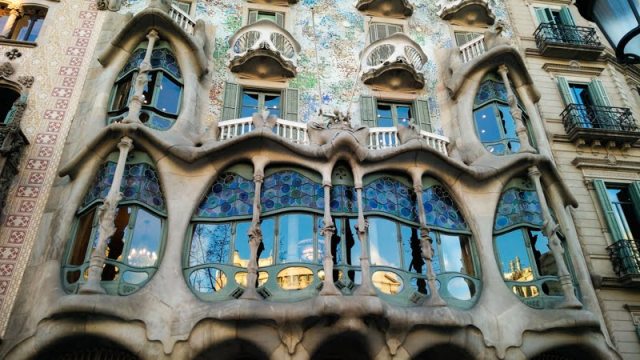 The first thing that strikes you as you admire the building is the complete lack of any sort of clean straight lines anywhere on the Casa Battlo facade. There was clearly some inspiration taken from the bone structure of humans, the fins on the body of a fish that were quite obvious to me. The top, I later learned was supposed to resemble the back of a dragon, and it actually does. Gaudi was already working on his lifetime obsession – the La Sagrada Familia – while renovating Casa Battlo. Sagrada Familia itself pays homage to design elements found in nature, so the departure in style as compared to other two buildings on this street is not surprising.

Even the glass on the windows were rounded in shape and it could slide up or down.

Let that sink in for a bit. Rounded glass windows with a up/down slide mechanism to let the light in was unheard of at the time Gaudi was making this stunner of a building – so he had to conceive and make these unique design elements as well. The balconies of the top floors resemble the skeletal structure of a sea creature. Rather the whole building had an almost exoskeleton like appearance. I really wish I had enough time to check Casa Battlo from the inside:( 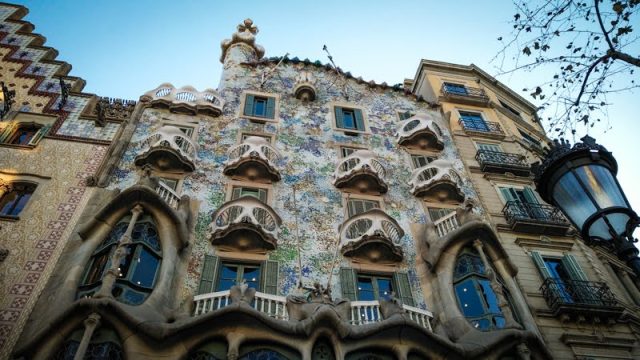 Casa Lleo Morrera by Lluis Domenech i Montaner
Montaner is considered to be the ‘Father of Catalan Modernisme movement’ thanks to his prolific portfolio of buildings. 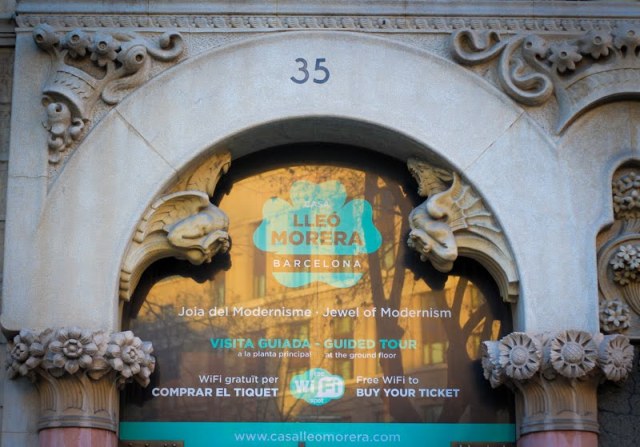 The Casa Lleo Morrera was a renovation of the building owned by the Morrera family. This looks much more traditional in its form as compared to the other two buildings. One can notice a lot of symbols such as the mulberry leaf motif – mulberry is called Morrera in Catalan, which was the family name; a lot of sculptures on the facade show figures with technological instruments of the time such as telephone, phonograph and so on. 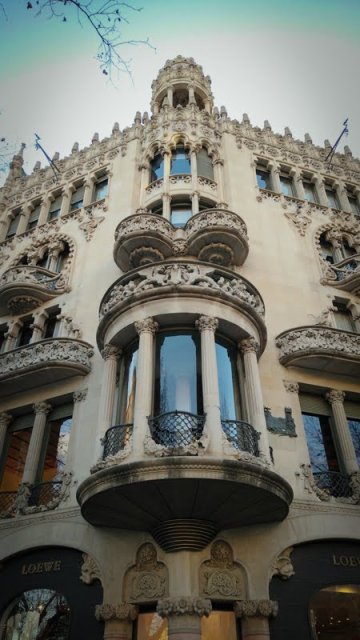 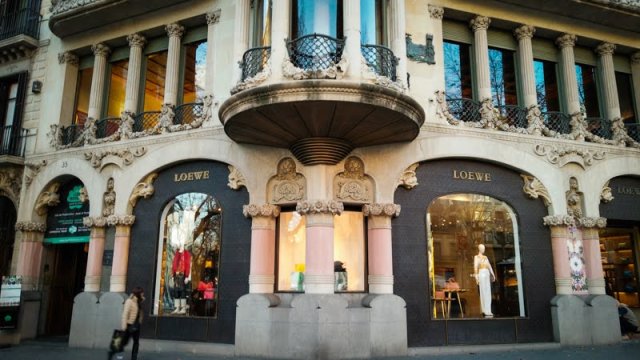 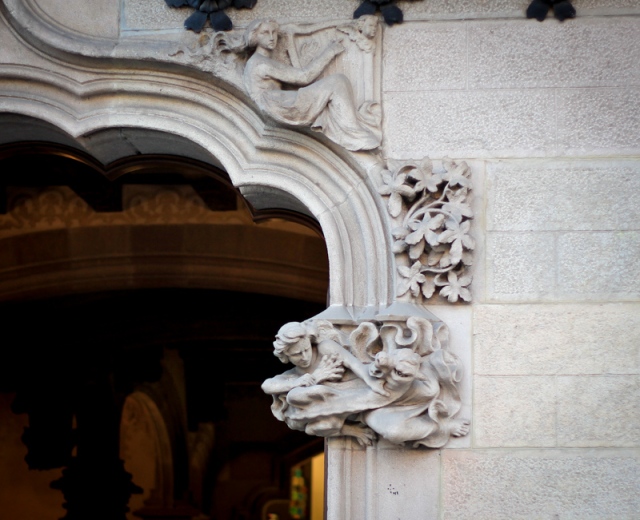 These are just three of the many many Modernist buildings in all of Barcelona – there are hundreds of them and well maintained too. Maybe I’ll talk about them another time. It’s a pity that this style of architecture stopped getting any patronisation post the 1920s.