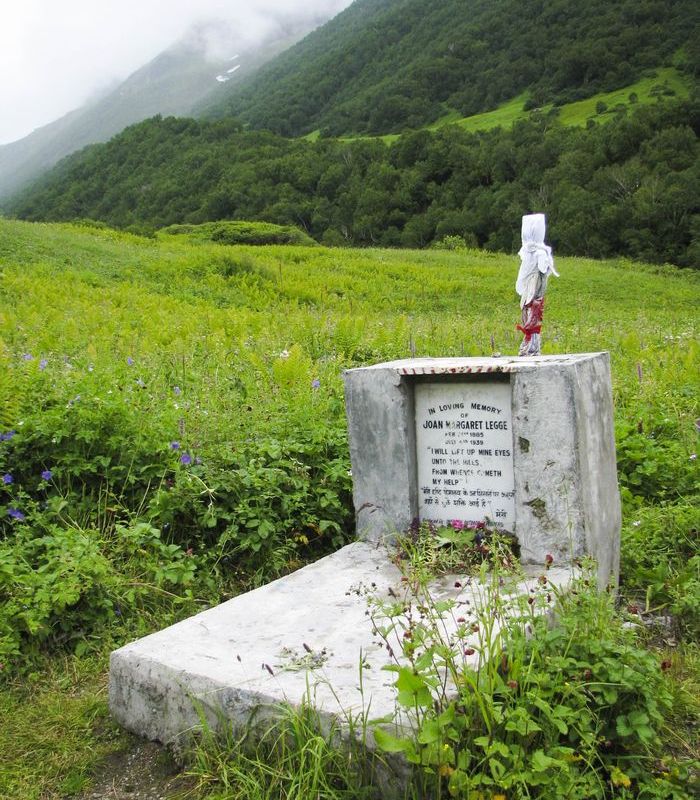 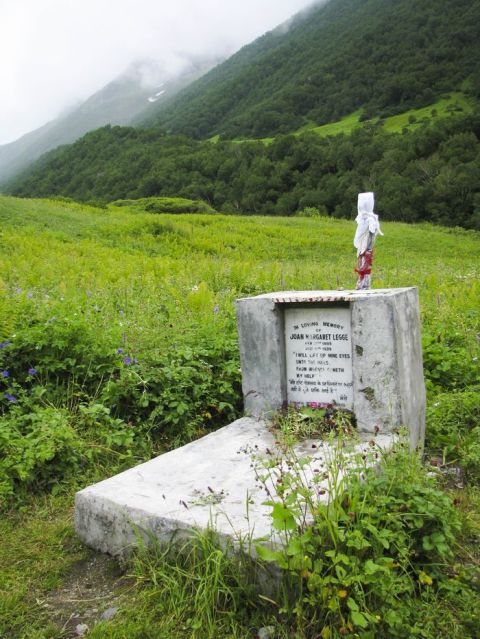 “I will lift up mine eyes upto the hills, from whence cometh my help”, read the memorial of the British student botanist Joan Margaret Legge, who while collecting some flora samples lost her life after a fatal slip back in 1939. In this heavenly place that is the Valley of Flowers, where the mind is in a state of total ecstasy, this memorial acts as a stark reminder of our mortality.

Located within the Nanda Devi Biosphere Reserve, in the Chamoli district in Uttarakhand, the Valley of Flowers is a national park where over 500 species of flowers, are the main attraction. It is open to the public from July to October, when most of the flowers are in bloom. The trek up to the Valley of Flowers starts from its base point – a small hamlet known as Ghangria – which seems to have more mules and horses than humans.

No sooner had I started the trek towards the Valley, than I noticed the stench of mule piss and dung being replaced by the fragrance of the wet earth and the countless flowers – a highly potent mix. Even though it was just a 3 km uphill trek, I was taking my own sweet time as I was surrounded on my way with exotic flowers. They came in all hues – blue, violet, yellow, orange, red. My mind kept wondering, if this route itself is so full of flowers, what lies in store at the actual destination?

It’s a stony pathway going downhill and then uphill, with the edges covered with green-coloured metal railings to lean on to. There are some patches however, where the road is quite narrow and definitely not meant for those suffering from vertigo. Halfway into the route, I was treated to my very first glacier sighting. In fact, a portion of the route went right through the glacier. And the glacier-n00b that I was, I slipped a couple of times, not anticipating the change in grip. My Woodlands which were ace grippers on the muddy path, were more like roller skates on the icy surface.

Clouds can be real mood-killers here, covering a majority of the high-rising black-coloured snow-peppered mountains. In the verdant greenery, those mountains look almost lifeless but when seen from the human vantage point, look quite majestic. Only when a drifting cloud engulfs you and reduces your route visibility for a while do you fall in love with the clouds. That is one experience no trekker is ever tired of. 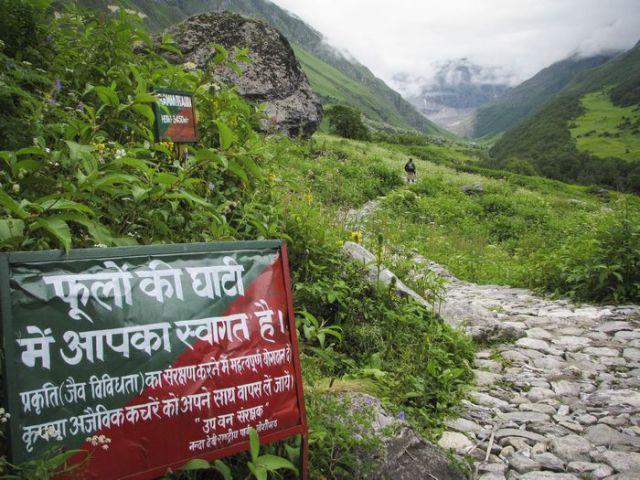 After a couple of hours of negotiating various patches, slippery muddy and icy roads, I finally came across a wooden bridge mounted above a stream of gushing pristine water which led to a board that read in the Devanagari Script “Fulon ki Ghati me aapka swagat hai”. After already having been subjected to so many flowers and changing landscapes enroute, my expectations were on a much higher pedestal, than when I had started my trek. This was a UNESCO World Heritage site we were dealing with, after all.

I wasn’t disappointed. The sheer variety of flowers I came across, as I made my way through the narrow gravelly path surrounded by lush greenery, made me feel like I was bang in the middle of a flower-encyclopedia. A botanist I am not, so I didn’t really know the scientific or, for that matter, even the common names of most of the flowers. Blue poppies, Himalayan balsam, Brahma kamal, Edelweiss are just some names I am able to remember from some of the experts who were there to check out one particular species. Everywhere I looked, it seemed as if someone had maintained a garden, but it was all wild growth. There was a method to the flowery madness for sure. Patches of pink, yellow, white, purple seemed to be scattered in places. The textures on each of the flowers were quite different, it made me wonder how completely illiterate I am as far as flowers are concerned. Also how awfully over-rated a rose is! 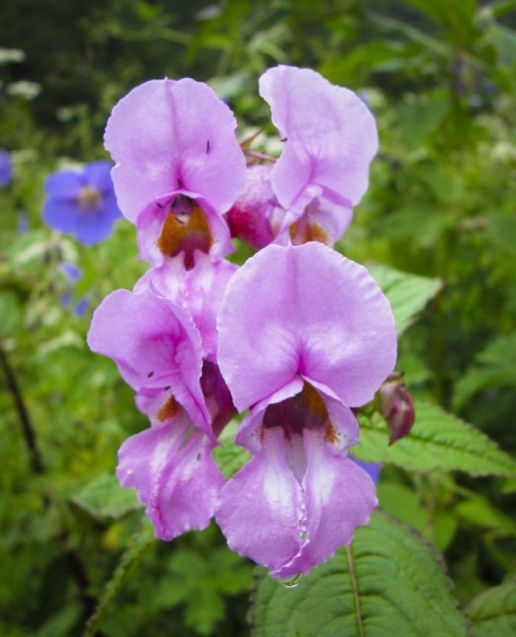 The Valley of Flowers spans over a huge area and it is surrounded by green hills. I lost count of the number of streams and brooks that dotted the landscape. Intermittent mild showers and winds sometimes made it a task to get a good macro shot. But in a place like this, you are bound to go nuts with your camera. There is just so much to shoot and so little time. 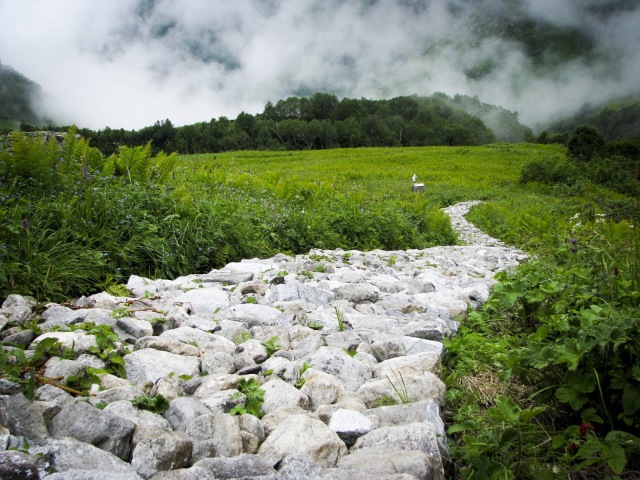 I used to think that ‘a land of fairies’, was only the figment of someone’s imagination. But sitting beside the stream of fresh mineral water and beholding that colourful sight of the valley I realised, that this might just be one of those places. I have been on countless treks, but no other place has been as remote as this, as away from humanity, as visually brilliant! Where the only sound you can hear is of a waterfall cascading down from some mountain nearby, where the fragrance from the earth and the flowers around you is so over-powering you will hardly miss your perfume, where all your senses are excited to their limits, but the mind is still at peace.

This is one of those places.