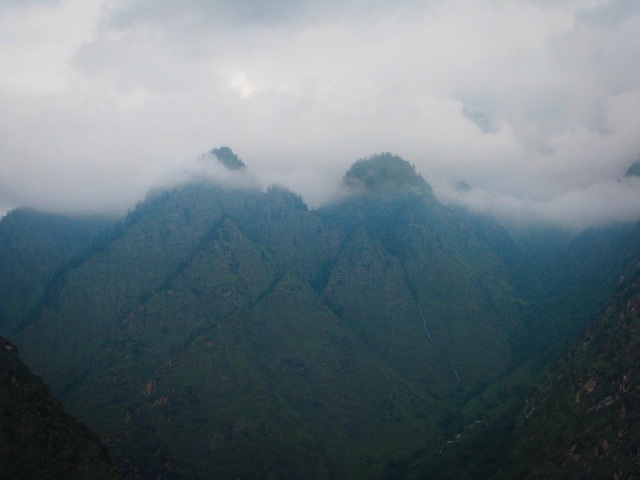 “Sahab, yaha pe kuch dekhne ko nahi hai. Aap Auli jaao,” these were the words I was greeted with as I was settling down in my hotel room in Joshimath, which was the last thing I wanted to hear after a back-breaking eight hour car journey.

Located on NH58 at a height of 1875m and about 9 hours from Rishikesh, give or take a few hours depending on the efficiency of your Sumo driver. I had left Rishikesh around 9 in the morning and reached Joshimath around 4pm. Did not bother hunting for the right deals at hotels, as the first one I went to gave me a two-bedroom room with attached bathroom at an affordable rate.
Vinod, the hotel guy, I realised, wasn’t lying. For a tourist there is nothing in Joshimath, he should proceed to Auli. Joshimath is basically used as a stopover point, by travellers going to and returning from Govindghat, a base for trekkers to proceed to the Valley of Flowers in Uttarakhand. It’s also a point from where people can proceed to the charming Auli – a ski destination during the winters. There’s a ropeway which transports you from Joshimath to Auli in around 45 mins.
Having already missed the last to and fro ropeway to Auli, I had no option but to explore Joshimath. It was still 5pm and I had around two more hours of light. So I set out to explore.

Joshimath is a sleepy town, with tonnes of hotels strewn around the main market area. I did the regular touristy thing by visiting the Adi Sankaracharya Math, which according to the Vinod, was the only place to see in all of Joshimath. It is located at a height from the marketplace, from where one gets a great vantage point. The hills on the opposite side of the valley were majestic. Clouds were shrouding the peaks every fifteen minutes or so, making photographing them tricky.
Sankaracharya Math was constructed in 8th century AD. It has a Laxmi Narayan Mandir at the entrance. The bright yellow color of the temple really looks out of place in the surrounding greens. To the left, one comes across a huge meditation hall. Proceeding ahead took me to the cave where Sankaracharya used to meditate called Shree Totkacharya Gunfa. The floor of the cave was comparitively cooler. The view from the cave was stunted by the staircase leading upto the Shiva temple. 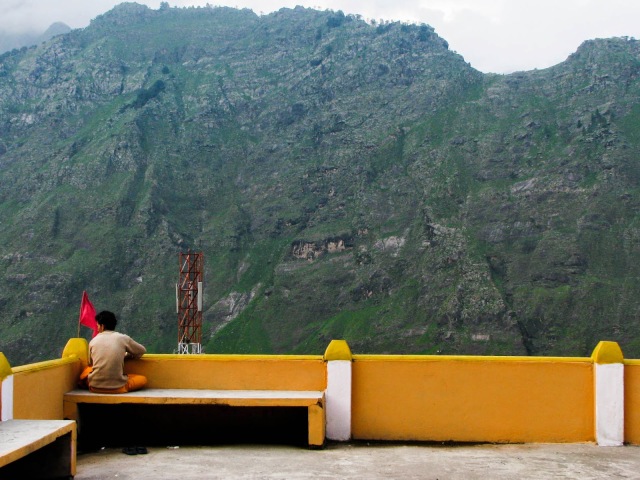 I came back on the main road. I remembered seeing a milestone talking of some Narsimha Temple. Now Narsimha, as we all know is the half-human, half-lion Avatar of Vishnu, who killed King Hiranyakashyap. The story goes something like this: King Hiranyakashyapa was blessed with the boon that no human, no animal could kill him either on earth or above it. Neither would he be killed during the day nor during the night, by no weapon known to mankind. He is drunk on power and is hellbent on killing his son, the Vishnu devotee Bhakt Pralhad. So the Narsimha avataar (half-man, Half Lion) gets Hiranyakashyap on his lap (thereby him not being on earth or up above) and kills him by piercing his nailed paws in Hiranyakashyap’s stomach (thereby satisfying the condition that no weapon can kill Hiranyakashyap). Hindu Mythology sometimes really does fascinate me to a great extent. 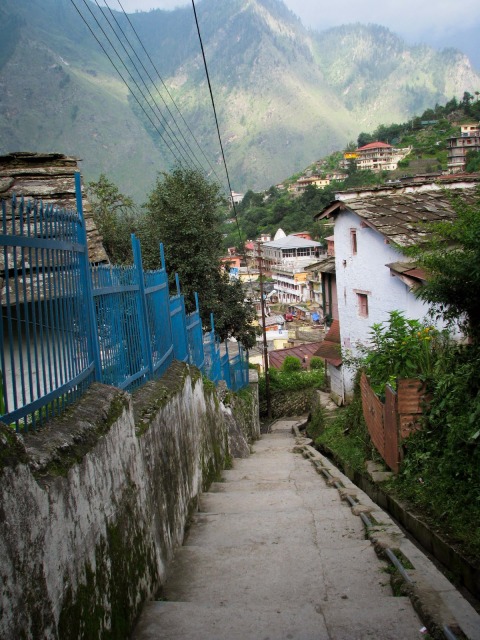 Having known the legend behind the story beforehand, a first for me, I decided to look out for this temple. The path leading up to the temple took me through the quaint alleys of Joshimath. This gave me an opportunity to pass by local houses and witness the villagers going about their lives first hand. The pathways sloping all throughout, kind of reminded me of Gangtok. I guess this characteristic is common with all the high altitude towns. One house in particular with is white columns, wooden balconies and windows, reminded me of a scene from an Indipop song called ‘Piya Basanti Re,’ by Ustad Sultan Khan which has been shot in Himachal Pradesh. There were many such houses I came across while taking this out of the way route towards the temple. 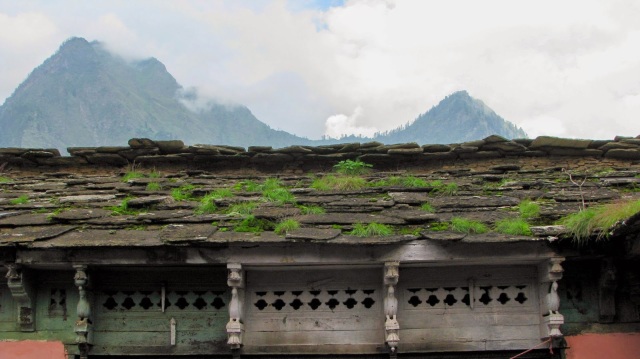 The temple was located in a corner. One really has to search for it. It is a temple complex, not really huge in size. But still it has many a confusing pathways. There is a Hanuman Temple, a Narsimha Temple and other temples. It also has a Math or a religious place, which is conspicuous due to the bright yellow paint spread over its exterior. The place was really quiet, I mean I could hear a pin drop. It is rare in temples in India to be so quiet. Another thing worth noticing was the cleanliness around the temples. Maybe the fact that some part of the complex housed the Pandit’s family was a reason. But it was pleasant to come to a quiet and clean temple. The one thing that fascinated me here was the roofing system. The roofs were made out of flat stones, again something I assume is a characteristic of high altitudes. 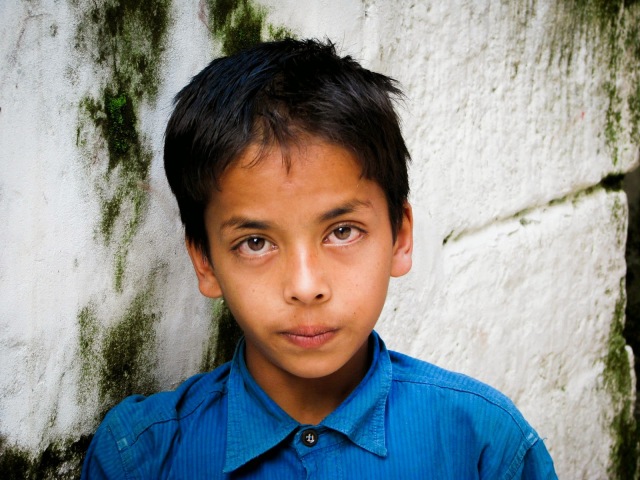 I met a local lad who gave me his version of the Narsimha story which was obviously made up. It was fun talking to him though and he told me about my next pit stop. I proceeded ahead off the main road. Came across another road which had jeeps parked. I would be on one of these the next morning heading towards Govind Ghat. I feasted on the local chaat and sat on a park bench with the wall of mountain in front of me with a valley leading up to it. Around me were people discussing local affairs in their mother tongue, which was slightly different from Hindi, but I was able to follow. This is one of the things I like, about visiting small towns. The chatter is so hyper-local, so completely cut off from the mainstream, that it’s refreshing. Being connected to the Matrix (global media) our conversations inevitably centre around pretty mainstream things, if the topic of discussion isn’t personal.

It was quite peaceful just sitting there observing people, admiring the tiny waterfall trying to make its way out of the wall of mountain. The zig-zag roadways on the mountain in the distance brought home the reality of the troubles people living at a height have to face. No wonder a lot of the residents have brilliants stamina. I could sit hours staring at the mountains. There’s something about mountains, that makes me feel irrelevant in the larger scheme of things. 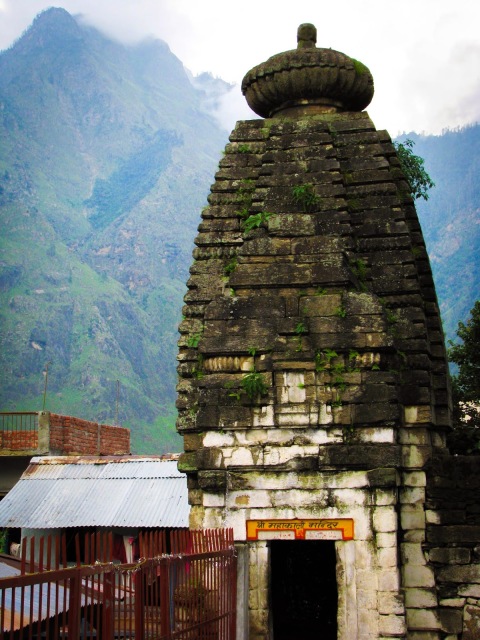 I had not kept any track of where I was headed, so was but natural for me to forget my way back. But it was not very difficult finding my hotel. There was a ‘bandar-ka-khel’ sort of a thing happening under my hotel. There was quite an audience to watch the shenanigans of the two kids who were doing stunts which were impressive. Last time I had seen that in the city was when I was as old as the kids. It seemed cruel to me, but that was what gave that family its dinner. I gave 50 bucks to the father and headed to my hotel room.